Sorry, for Internet Explorer only 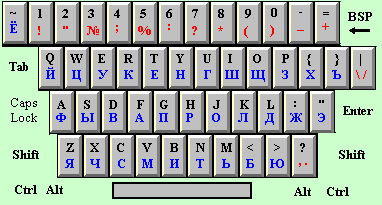 There is Keyboard Layout QWERTY for Cyrillic's Standard Positions in Windows. There is not virtual keyboard - there is simple scheme of keys.
The common (non-cyryllic) keys are not present here.
You should set focus (by mouse) in text box above and after that press Latin keys on USUAL Keyboard of your PC (under Windows IE).
If checked Cyrillic radiobutton, the program will transform the entered latin char to Cyrillic char (in UTF-8 charset).
If char does not present in this picture, it will the same as standard key char.
Cyrillic Chars can be combined with Latin chars (with change radiobutton and restore input focus in text area). Results will present in the text box above.
Text from this box can be selected and copyed into other window (Text Editor or Dictionary for example).
NOTES: This keys transformer tested under Microsoft Internet Explorer IE6 only.
In our opinion, usual keyboard is more convenient to text input than mouse clicks on virtual keys (on the screen).